In 2018, the Mountain Rose Women’s Shelter Association helped 165 women and children but had to turn away more than three times as many. The non-profit, charitable organization provides resources and support to individuals and families impacted by domestic violence in the town and surrounding Clearwater County.

“We’re allowing women and children to make choices in their lives and give them an opportunity to look at other options,” said Lisa Block, President of the association’s Board of Directors.

“Because we don’t have a homeless shelter, we offer that to women as well…. If we can’t house them, we look for alternative housing for them.” 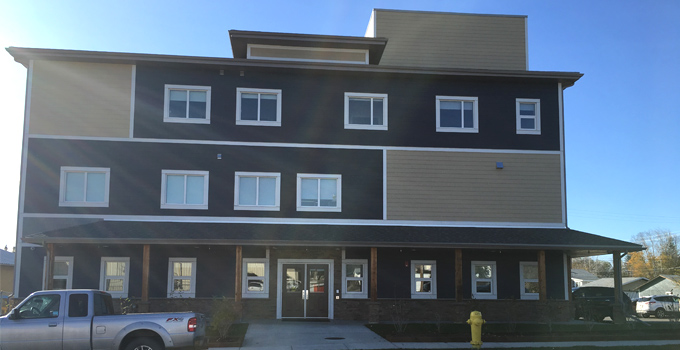 The new Mountain Rose Centre is drastically bigger than its predecessor at 20,000 square feet over four floors versus 1,200 square feet previously. The emergency shelter is increasing from 10 to 21 beds and offers more flexibility in accommodating single women and women with families. The centre also includes administration and program space and five new second-stage apartments, which will provide more time for women to become established. 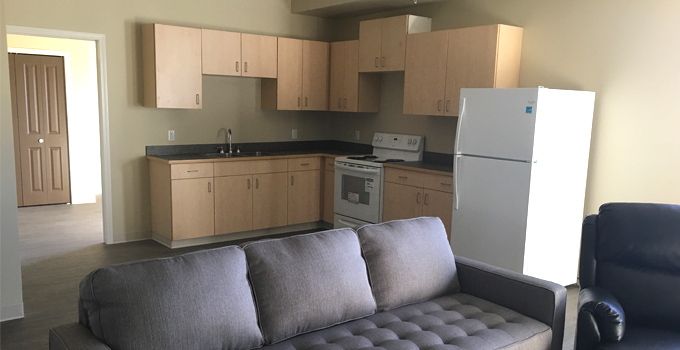 Plans for building the new centre began in earnest in 2012.

“When we first started this project, the economy in Alberta was doing well,” Block explained. “Unfortunately, it hasn’t done well in the last five years.”

The downturn made it more difficult to secure funding and grants, but contributions from individuals and businesses in the community allowed construction to proceed and the emergency shelter to open in August 2019.
Jason Stewart, Hardware Manager at the Evergreen Co-op Home Centre in Rocky Mountain House, first heard about the project when his team was bidding on supplying building materials.

“The project was needed badly and we thought this was an opportunity for us to get involved,” Stewart said. “I really wanted to do something big because I think the project demanded a lot of attention.”

Through its Communities in Full Colour Program, Co-op donated more than $18,000 worth of paint to the project – which required a tight turnaround and specific paint requirements. Seven Co-op employees also volunteered their time to help paint a few rooms in the centre’s basement.
“It’s a great benefit to our community. The community has stepped up and provided support, rallying behind it,” Stewart said. 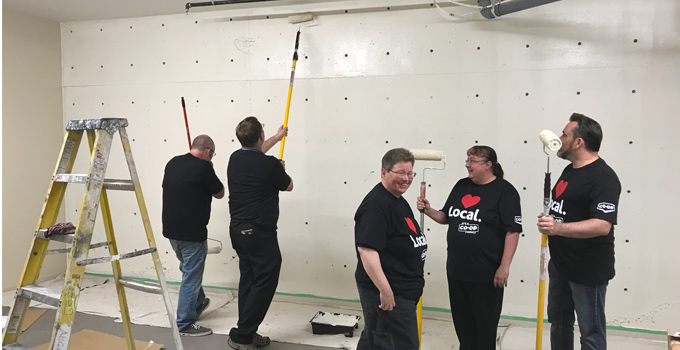 This isn’t the first time Evergreen Co-op has partnered with the women’s shelter association. Co-op has held fundraising barbecues and delivered bicycles donated by anonymous community members to children staying in the shelter the last two Christmases.

“Co-op is always there for us,” Block said. “Anytime we need donations of food or help, they very much support our organization.”

This allows the association to continue doing vital work in the community. Block expects the emergency shelter and second-stage housing – which is planned to open in 2020 – to be full all the time.

“Unfortunately, it’s not being used less because of the tough economic times, it’s getting used more.”