The transformation of the West End Community Garden in Dauphin, Man., is nothing short of inspiring. With upgrades to the play structure, little library and strawberry boxes, the community space’s revitalization will significantly contribute to the larger renewal effort in the surrounding community.

Helping to make the facelift possible, Dauphin Co-op provided six staff volunteers and donated six gallons of paint as part of Co-op’s Communities in Full Colour Program – a philanthropic initiative that donates CO-OP® Imagine paint to local non-profit organizations.  On July 28, the Co-op volunteers – along with others from the community – turned the dull and faded park grounds into a vibrant and bright red that will uplift users’ spirits for years to come.

Joan Chetyrbok, Marketing Manager at Dauphin Co-op and one of the volunteer painters, said, “The new paint has brightened up the community and brings more families out into the neighbourhood. The next day, I saw kids playing all over the structure.” 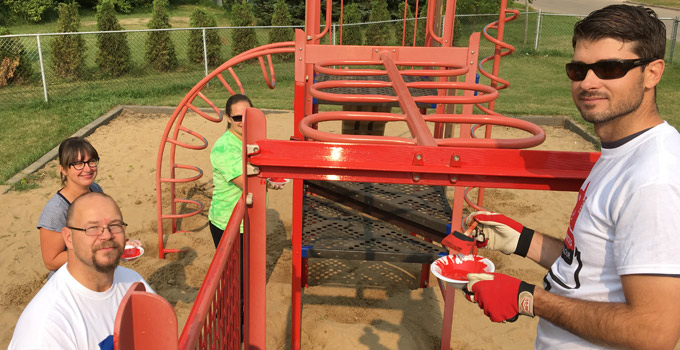 The paint donation is an important component to the overall renewal of the west end. As an older and often neglected area of town, the west end has struggled in the past to secure funding to develop its neighbourhoods. In the last few years, however, there has been an increase in new builds and infill housing, including multi-family and single-family dwellings. With a beautiful and refreshed park, residents have one more reason to celebrate the west end’s renaissance.

The paint event coincided with the local library’s garden story time, with a snack provided by Co-op. Dauphin Neighbourhood Renewal, Healthy Living Now and the Parkland Regional Library partnered together to host four events throughout the summer that included a story and activity, including arts and crafts, old-fashioned games and children’s yoga.

Dauphin Co-op truly believes in giving back to the community. The West End Community Garden is the fifth project they have supported through the Communities in Full Colour Program. Other benefactors of the program include the Ste. Rose Recreation Centre, Charlie Brown Daycare, Ochre River Recreation Centre and Parkland Campus Kids Daycare. All five initiatives have impacted Dauphin and the surrounding communities in a positive way.