Saskatoon Co-op and Cosmopolitan Industries will be forever bound in one local retail employee’s heart.

On March 8, 12 Saskatoon Co-op employees volunteered to help put the finishing touches on Cosmo’s restoration project as part of the organization’s inaugural Day of Caring event and Communities in Full Colour. Jenielle Henderson was one of those employees pitching in. 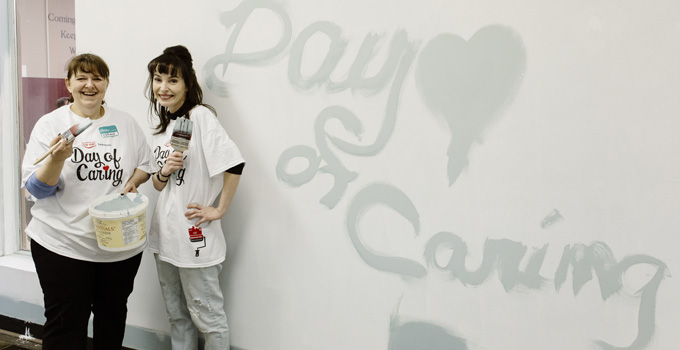 With an uncle who lives with an intellectual disability, Henderson has personally witnessed the benefits Cosmo brings to its program participants. Cosmo’s vision statement is to enhance the quality of life for adults with intellectual disabilities – which includes specialized programming that builds creativity, independence and dignity – through a variety of personal and vocational skill enhancement. So when given the chance to help the charitable organization that has meant so much to her and her family – and to do so as a Saskatoon Co-op employee – she jumped on it.

“It’s a great feeling being here and volunteering, knowing we’re actually doing something today that’s going to make a difference in people’s lives,” the 10-year team member said, noting Co-op has been a huge part of her entire life, starting with its Kids’ Club program.

“It’s the little things in life that mean so much to people, and we often forget that.” 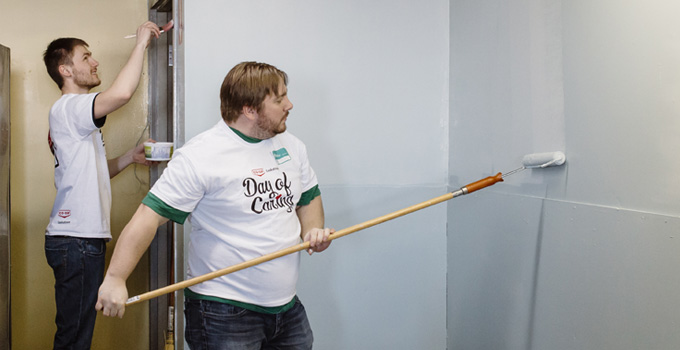 In April 2016, a water pipe burst at Cosmo’s central branch location, flooding more than 50,000 square feet of the building’s lower main floor. The traumatic incident caused extensive damage to the programs and recycling divisions, offices, boardroom, gym and more. While insurance covered the bulk of the reconstruction costs, a void remained for some of the paint remediation.

In addition to receiving the manpower to finish the job through the Day of Caring program, Co-op donated approximately 150 litres of CO-OP® Imagine paint via the Communities in Full Colour program.

Far from strangers, the two community-based organizations have established a supportive bond dating back over 40 years. In providing various contract work to Co-op, and as a Co-op member, Cosmo and Co-op share a mutually beneficial relationship. As such, the significance of the day was not lost on the non-profit’s executive director, Sharlene Duquette. 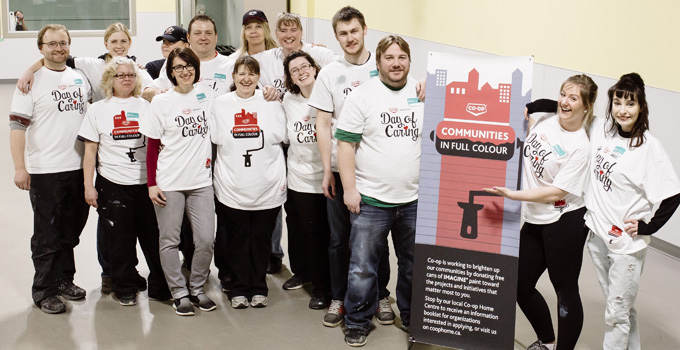 “We’re excited to have a continued partnership,” Duquette said, noting the organization supports approximately 380 individuals with a staff of about 150.

Jason Ryden, one of Saskatoon Co-op’s Operations Managers, concurred with Duquette. He noted it was no coincidence Saskatoon Co-op chose Cosmo as a recipient of both the Communities in Full Colour paint donation, as well as the staff to help with the actual job.

“Cosmo’s vision statement is about giving value back to the individuals who come into their building, and we’re the same way. We’re trying to give value back to the community, so it was a good partnership for that reason,” he said.