If the name Kate Campbell rings a bell or she looks familiar to you, it might very well be because she has been featured on several TV programs, highlighting her considerable construction and renovation skills. Kate has been part of the crew for HGTV’s Home to Win, Deck Wars, Holmes On Homes, Holmes in New Orleans, Holmes Inspection and assisting the final contestants as a part of Handyman Superstar Challenge. 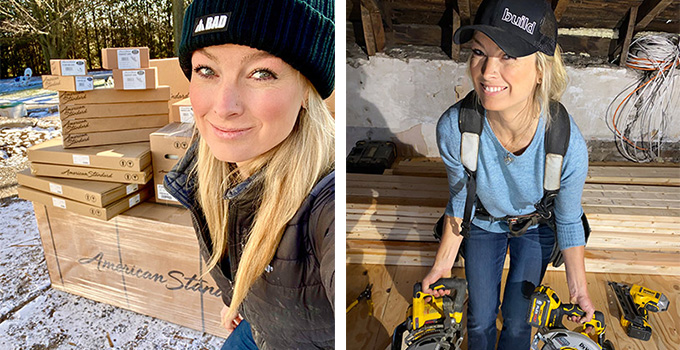 Aside from being a TV personality and a master contractor, she is also an advocate for women in the trades. Her passion for the trades started in 2005. After graduating high school and realizing that the university path just wasn’t for her, Kate applied to a "Women In Skilled Trades" (WIST) course based out of Burlington, Ontario. After being accepted to the course and picking up a power tool for the first time, Kate realized she had found her passion. During the three-month program she was introduced to carpentry, electrical, plumbing, finish carpentry and several other trades. Kate had always known that she wanted a career where she could stay active, be creative and constantly be challenged. Well... she found one!

While working with these shows she was faced with many challenges and was also exposed to every aspect of home renovation and building. Kate was personally involved in building two homes and helped with countless renovations. She’s worked with the best designers, best builders, and the most cutting-edge building materials out there.

Kate is now one of the hosts on HGTV’s “Custom Built” which combines Kate’s skills from her early renovating days and her creative, fun attitude from building on Decked Out. After over ten years on HGTV Kate’s career has now come full circle.

When she’s not working with the show, Kate also runs her own renovation company - KateBuilds Inc. Her company specializes in small renovations and custom carpentry (built in cabinetry, custom casing/crown, wainscoting, kitchen, and bathroom renovations).

Kate is extremely passionate about speaking to young women who are considering entering the trades. Kate is focused on “changing the face” of the skilled trades and ESPECIALLY passionate about being an advocate for women and supporting causes that are important to her.

Kate also believes in giving back whenever and wherever she can. Kate climbed Mount Kilimanjaro with the Canadian charity WaterAid in March of 2014 raising $15,000 while helping promote clean water initiatives in Africa. Kate’s mission is to use her story and experience to help as many women get into the trades as possible.

Co-op is proud to work with organizations like American Standard and its brand ambassadors such as Kate.

*Figures are based on the number of apprenticeship program registrations in skilled trades from Statistics Canada, 2021.